When you're smiling -- the transplant, one year on 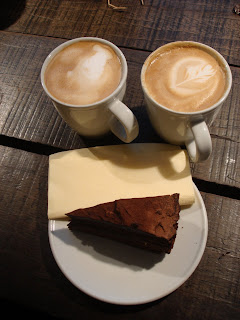 Yesterday it was one year since the transplant, and we went out to our favorite Alkmaar restaurant to celebrate. We began talking about what it had been like one year before -- coming out of the anesthesia, trying to eat a little bouillon -- and my strongest memory was of just lying there in my hospital room, fresh from the operation, with a smile on my face. There was a purity of happiness during those days that still makes me smile.

What was it about that happiness that was so pure and joyful? At first I thought it was simply a matter of coming out of major surgery and knowing that I was still alive and that nothing had gone wrong, that all the weeks and months of stress and anxiety were over. But it was more than that. I’ve been deeply relieved before (when the SATs were over, for instance, or when I got my driver’s license), but I didn’t find myself just lying in bed with a smile of pure happiness. Then I thought it had to do with the joy of giving, the feeling you have when you give someone a big present, when you make a grand gesture. I’ve done that before, too, and it does make you feel good. But if you examine your good feelings about making grand gestures, there’s always that nagging sense that you’ve done the thing partly out of a sense of egoism -- if I make this gesture, people will nod and say, “How generous she is.” Even if you don’t act from such a motivation, it’s always there, muddying up the waters.

But this was pure. There was no mud in the waters at all. I can’t remember when I’ve ever felt a happiness like this. And I think it has less to do with the gesture itself, the gift, than with happiness at having been given the opportunity to make the gesture in the first place. Before the operation I didn’t feel it so intensely. I remember at the beginning, when I first offered to give my kidney, how thrilled I was to learn that our blood types were the same, and with every test I was equally glad to learn that no problems or anomalies had been found. But there was a complexity of other feelings, too: anxiety about the operation, about how it would affect me to have only one kidney, about how long it would take to recover. I had crossed the threshold and had said my yes, but I still felt that I was moving relentlessly towards a great unknown.

Last night during dinner Jim and I talked about what it had been like the day before the operation, when we were being prepped in the hospital. Neither one of us was nervous. We remembered taking the early morning train to the AMC with our packed bags, traveling first class (which we rarely do), smiles all over our faces. At that point you’ve placed yourself into other hands -- the hospital is waiting for you, the bed is ready, the surgeon has you down on his list and all you have to do is show up. Early the next morning, just before the operation, the nurse asked if I would like a pill to calm me down, and even though I didn’t feel apprehensive, my legs were shaking uncontrollably and I said yes. It was half of a little blue pill, and it was very effective. I don’t remember being wheeled into the operating room at all. By the time I got there I was out cold. Several weeks after the operation, a translation colleague who also works as an OR nurse at the AMC sent me an e-mail in which she said she had seen my name on the daily operation roster. She told me she had come up to my bed in the recovery room and quietly said, “Nancy,” and that I had opened my eyes and given her a “lovely smile” and gone right back to sleep. I don’t remember this.

The happiness of having been given the opportunity to do something out of love. That’s what it is. It’s gratitude. It’s gratitude that everything just happened to turn out right: the right blood types, the right tissue matches, the right outcomes on all the tests. It’s gratitude that the medical people in Alkmaar and Amsterdam were all so kind and supportive, and so incredibly skilled. But it’s also gratitude for the strength to cross the line to yes. Freedom is a very mysterious thing. Acting in freedom is not acting in a vacuum. Every yes or no we utter is the product of a lifetime of being exposed to examples, of being taught certain things and of having been loved -- or not. Yet each yes or no is not predetermined by these things, and we’re responsible for every decision we make. We’re not doomed by our past to make decisions in a certain way, nor can we get away with taking the easy way out and pointing to our past as the rationale. Contexts are terribly important, and it’s important to give your children good examples and to tell them stories of courage and selflessness. Yet every yes or no we say is uttered, as it were, in eternity, and though it may be shaped by the past, it’s not inevitable. “Love without freedom is slavery,” said our friend Fr. Meletios Webber. Gestures of love must be made in freedom. And to be given the opportunity to make such a gesture is a great thing.

I think that’s what the smile was all about.
Posted by Nancy Forest at 6:09 PM