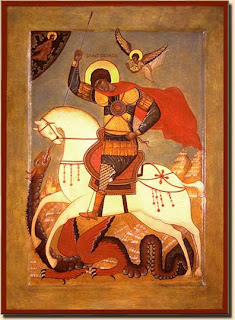 Like a pregnancy, three months is the magic number in kidney transplants. During the first three months after the operation, everybody stands around waiting to make sure that the transplant “takes.” The doctors are alert to any sign of rejection. If after three months the kidney is still behaving itself and shows no signs of quitting, the doctors -- and the donor and recipient -- breathe a sigh of relief.

On Thursday it will be three months since the operation. Today (Monday) I went for my first check-up with the transplant team at the AMC in the person of Sylvia ter Meulen, the head of the live transplant team. Sylvia is one of those people with a big smile who just oozes positive energy and enthusiasm, and when I told her I felt great and had not a single complaint she just glowed with happiness and satisfaction.

One interesting development that we discussed was this peculiar feeling of energy and good health I’ve noticed -- peculiar because not only do I feel normal, but I feel better than normal. I find myself coming up with new ideas: things I want to change, such as the logo of the business and the whole computer operating system I’m working on. I want to send out a mailing to my clients to thank them for their patient kindness during my convalescence and to let them know I’m fully recovered. I’ve volunteered to join the parish council again, and have agreed to become the church secretary. But I also feel more awake then ever. I feel more spring in my step. I feel less beaten down, less overwhelmed, less frustrated by a lack of time or energy. I feel more capable, stronger.

Jim recently told Sylvia about this at one of his bi-weekly check-ups, and she replied in an e-mail, “I'm glad Nancy is doing so well, though it doesn’t really surprise me. In fact, some studies (I believe in Sweden) even show that living kidney donors experience a better quality of life after donation!” I found a scholarly article on the internet about the quality of life of kidney donors (“Impact on living kidney donors: quality of life, self-image and family dynamics,” Nephrology Nursing Journal, Sept-Oct, 2005 by Patricia A. Fisher, Denise J. Kropp, Eileen A. Fleming), and several paragraphs stood out:

Quality of life issues have been studied in regard to living kidney donors. According to Ciszek, Paczek, and Rowinski (2003), kidney donors have been reported to have enhanced life quality and self-esteem. Other quality of life studies (Corley et al., 2000, Gouge et al., 1990) have also shown that donors were generally positive overall about donation, but that it did not enhance their overall quality of life.

This article is a report of a study that was conducted with a group of live kidney donors from Akron City Hospital in Ohio (all the surviving live donors whose donation had occurred since the transplant program there began in 1967 and who could be located, or 119 individuals). As a result of the study:

Sixty-two percent of the donors in this sample rated their current health as very good to excellent. The average standardized physical component summary scale score of the SF12 for this sample was 51.5 with a standard deviation of 7.3, which is slightly higher than the norm of the general U.S. population average score of 50.12 (Ware, Kosinski, & Keller, 1998). The majority of the participants (75%) reported not being limited at all in physical functions, but 9% reported that bodily pain interfered with their normal work quite a bit of the time. The average standardized mental health component summary scale score for this group of donors was 50.6 with a standard deviation of 9.21, which again is slightly above the U.S. general population norm of 50.04. Only one person reported feeling downhearted and blue all of the time, while 71% reported feeling this way little to none of the time.
…

Individuals who decided to donate of his or her own free will were generally very satisfied with the decision to donate. The majority of donors felt a continued sense of closeness with their recipients as well as an enhanced happiness and self-esteem.

Sylvia echoed these sentiments in her talk with me today. She said donors generally begin valuing life and their own health more. This is quite true. I’m deeply grateful that I was healthy enough to give Jim my kidney, and I’ll never again take my health for granted. I’m relieved the whole thing is behind us and relieved it all turned out so well. I guess “self esteem” has something to do with it, although I don’t go around feeling like a hero. The stress is gone. Someone at church yesterday pointed out that I had made the ultimate sacrifice, that I had done all that could be done, and this knowledge must have some kind of impact. We know that stress has an enormous impact on physical well-being. In the year since I began being tested as a possible donor I’ve lost 7 kilos, or 15.4 pounds! I’ve gone down a whole size.
But I also wonder if it also doesn’t have something to do with the triumph over fear and the decision to act out of freedom. I told Jim yesterday that it was like fighting a dragon and winning. I think the reason I don’t go around feeling like a hero is that I know how difficult it was to say yes and to overcome my fears, and I have no more illusions about my own weaknesses. I know that the next challenge that presents itself is going to demand a brand new decision, that the dragon is never really slain, and that the best you can do is to sharpen your dragon-slaying skills. It’s worth the effort.

Posted by Nancy Forest at 9:55 PM No comments: 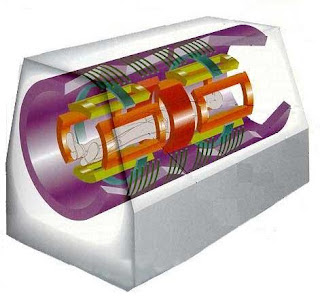 In the hospital in Amsterdam the day before yesterday, I had the strange experience of my first MRI. This means being inserted into a narrow tubular space inside a massive science-fiction-like machine that manages to look, in high resolution detail, at the inside of the body as if it were a fish bowl. This is done with focused magnetic impulses, apparently very powerful. It’s an amazingly noisy machine. I had imagined eery silence. Instead I felt like I was spending half an hour in a crawl space beneath a street that was being attacked by pneumatic drills. I was provided with a pair of earphones so that I might listen to what was described as "easy listening" music, but the music was audible only in those brief intervals when the pneumatic drills took a break.

The MRI scan was requested by one of my doctors several weeks ago when I was having a lot of pain where my hips are joined to my legs -- almost certainly a side effect of the anti-rejection medication I'm taking daily.

Since the MRI was scheduled, probably due to changes in medication, my legs are back to normal. I can bike again, and walk without giving it a second thought. No need of a walking stick.

The results of the scan? I may find out tomorrow when I have my next appointment at the AMC's out-patient clinic for kidney patients.
Posted by Jim and Nancy Forest at 1:00 PM 1 comment:

A fireplace of welcome 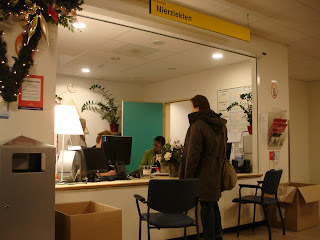 The photo is a view of the reception counter of the kidney illness unit of the AMC’s Polyclinic (for out-patient care). It's a very familiar sight. During the first few weeks following the transplant I was here twice a week. Now it’s once every one or two weeks. Nor are the visits ever brief. I get to do a lot of reading while I await my turn. These last few weeks it has been Tolstoy’s War and Peace in the new translation done by Richard Pevear and Larissa Volokhonsky. (If you have never read it, now’s the time. I doubt there will ever be a better translation in English.)

The woman behind the counter on the right, Ruthline, is always a fireplace of welcome, not only eager to know how I’m doing but certain to ask about Nancy as well. She loves speaking English, so we almost always converse in that language. Checking my blood pressure a week ago in an adjacent room, the word “God” entered our conversation. “I thank God,” she said, “that things have gone so well for Nancy and you. I have been praying for you.” “Believe me,” I assured her, “we thank God every day.” “You believe in God?” she asked. “Oh, yes,” I told her. “Isn’t it sad,” she said, “that so many people don’t? How is that possible?” I suggested it might have less to do with God than with negative experiences people have of churches, or the negative church experiences of others they have heard or read about. Also, for some, belief in God is just not fashionable. “That must be it,” she said. “Maybe all those things.”

We started laughing. In fact I laughed so hard that she had to take my blood pressure again as she thought the laughter would have thrown the reading off.

I had thought that a journal about a kidney transplant would surely end not long after the transplant, assuming all went well. In fact the transplant seems to have been entirely successful, and yet, even two months later, an occasional update seems in order, if only to share the post-transplant side of the event, as the AMC’s kidney staff keeps a very sharp eye on how things are going with all their transplant patients, intensively so the first few months.

The numbers continue to be good. My kidney function, as computed yesterday, is 88 percent -- a good deal better than is generally found in people four years short of seventy. The maximum might be found in a young person in excellent health.

The latest reading of my creatinine level is 118. Compare that to over 900, as it was on October 30, the day before the transplant.

Another welcome sign: Eight days ago, I had to use a walking stick in getting to the hospital. It was slow going. My left leg had been troubling me for days, which doctors at the AMC assumed was a side effect of the anti-rejection medication I’m taking. Yesterday I was able to make the journey on my own two legs, nor had I used the walking stick at all throughout the past week. Perhaps this has to with the reduced dosage of Neoral, one of the medications they watch most carefully, or the increased calcium I’ve been taking lately, or simply my body adjusting to medication. Still, in order to have a better idea of how the joints and surrounding muscle and tissue look in the area where my legs meet my hips, an MRI is scheduled for January 15.

A note that has nothing to do with kidneys or hospitals: for Russian Orthodox parishes, it’s almost Christmas. As we’re on the “old calendar,” Christmas comes thirteen days later than it does for most other Christians. By this reckoning, tomorrow is Christmas Eve. All this can be a bit confusing for those not living in Russia or part of a Russian parish in the west, but it can have its advantages. In our case it means a two-tiered Christmas celebration -- the days of December 24th through the 26th a time for family events, then a liturgical Christmas mainly centered at our parish in Amsterdam.